Sector R is a sector located in Russia. It was turned into a tapioca factory in Operation: Z.E.R.O..

They participated in the annual 2x4 Technology Convention in Operation: S.C.I.E.N.C.E.. Their booth appeared to be an old caravan.

Lastly, they took part in the scavenging hunt in Operation: I.N.T.E.R.V.I.E.W.S., ranking among the bottom sectors.

It is located inside the Moscow Kremlin, on top of the Grand Kremlin Palace. On the top there is an antenna, highly resembling the real-life Soviet Sputnik satellite and the rest of the treehouse seems to have been made out of numerous Soviet-era artifacts, including what looks like a nuclear reactor. It even has what appears to be part of Saint Basil's cathedral, to further complement its Russian appearance.

Although Kids Next Door is indeed a fictitious show that isn't based on reality (politics/media that is) or tries to be, here is a list of plot holes that would interfere with the Russian KND/Sector R if it was attempted to fit in the real world. 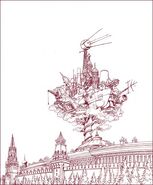 Turned into tapioca factory in Operation: Z.E.R.O.
Add a photo to this gallery

Retrieved from "https://knd.fandom.com/wiki/Sector_R?oldid=81927"
Community content is available under CC-BY-SA unless otherwise noted.