The Role Playing Weapons was a short line of life-size toy weapons from Codename: Kids Next Door released in 2005.[1] Only two weapons were produced: S.H.A.V.E.R.A.M.A. and F.R.A.P.P.E..

The S.H.A.V.E.R.A.M.A. is also modeled after its counterpart in the show, with the same acronyms. The shaving cream canister can be loaded either with water or with S.L.U.M.U.N.I.T.I.O.N. (Stringy Long Ammo Most Usually Needed In Totally Important Operations Now), which is a canister of silly string that comes with the toy. This is activated by pulling the trigger near the handle. The canister on top of the gun can launch foam razors, by cranking the handle above the gun handle.

The F.R.A.P.P.E. is modeled after the F.R.A.P.P.E. gun in the show, but the acronym is changed to reflect how it now shoots foam rings, rather than a freeze ray. The mixer is built to be able to hold 20 discs, with a lid on top to load them in. 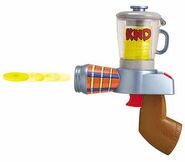 Retrieved from "https://knd.fandom.com/wiki/Role_Playing_Weapons?oldid=87449"
Community content is available under CC-BY-SA unless otherwise noted.