Cafeteria Worker at Sure Would Forest Retirement Home

Sure Would Forest Senior Center

He's something of a moron, as Lydia Gilligan points out Robin is supposed to COOK food, not steal it.

He and his band of Hungry Men "rob from the young and give to the old"; they attack elementry schools during lunchtime and steal kids' lunches, which they then give to the old people at Sure Would Forest Senior Center, who hate the kid food he brings them due to the fact it's bad for them, though he's too delusional to realize this.

In Operation: L.U.N.C.H., they raid Gallagher Elementary School`s Cafeteria during Nigel's "romantic lunch" with his possessive girlfriend Lizzie, who prevents him from intervening.

When they steal Lizzie's lunch, she takes the L.O.C.K.A.H.S.O.C.K.A.H. and storms the Sure Would Forest Senior Center to retrieve her lunch. Just before Lizzie forces Robin Food to surrender, he calls her selfish and claims he's giving it to the seniors because they're starving to death. Lizzie is touched by Robin Food's kindness. The Senior Citizen Squad form their robot and prepare to attack. Robin Food and Lizzie both think they're going to attack Lizzie until the Squad reveals they are going to attack Robin Food, to the pair's shock. The Squad and the other seniors reveal that Robin Food and his Hungry Men are really their retirement home's cafeteria staff who are supposed to make them lunch themselves and that they only raid elementry school cafeterias and steal food from children because they're too lazy to do their jobs. The seniors also reveal that they do not want to eat children's food as they give seniors complications, such as preventing them from using the bathroom and causing problems for their bridgework.

Lizzie gets her lunch back as the SCS proceeds to beat up Robin Food and his Hungry Men.

In Operation A.W.A.R.D.S., Robin Food is the host of the Villain's Choice Awards and Dinner Show. He was also seen next to the Dodgeball Wizard in Operation: Z.E.R.O. during the Candy Pirates attack on Kids Next Door Moonbase, and was later seen at the Convention Center.

He made one last appearance in Operation: I.N.T.E.R.V.I.E.W.S. where he tried to steal Gramma Stuffum's Tusk Pie, which then grew tentacles and attacked him and his Hungry Men, which reporter Nick commented, "It looks like Robin Food picked the wrong pie to pilfer."

The food bandit's song is to the tune of the "Rainbow Monkeys" song. These are the lyrics:

With his band of hungry men, he comes to school at noon and then...

He robs from the young (and the rude) 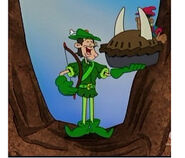 Stealing Gramma Stuffum's pie in Operation: I.N.T.E.R.V.I.E.W.S.
Add a photo to this gallery
Retrieved from "https://knd.fandom.com/wiki/Robin_Food?oldid=86545"
Community content is available under CC-BY-SA unless otherwise noted.