Numbuh 44A and Numbuh 44B are twin operatives who share the same number and the same position.

They are both guards at KND Arctic Base (where they were first seen), though they may sometimes be seen at KND Moonbase, such as when all the operatives gathered to hear Numbuh 362's announcement that she was quitting in Operation: I.T.. When one of them was tagged, they both became Supreme Leader(s), and starting tagging each other back and forth; this resulted in their ship crashing on Sector J because there was no operating pilot. The tagged 44 twin then stumbled out of the ship and tried to tag Numbuh 1-Love, but Numbuh 1-Love threatened him with a S.P.L.A.N.K.E.R., saying, "Don't even think about it, mon." As a result, he tagged Numbuh 112 and jumped into the water to get away.

They are also seen escorting defeated villains off to the Arctic Base via S.P.R.A.Y.S.H.I.P. (Operation: M.A.T.A.D.O.R. and Operation: S.N.O.W.I.N.G.). In the episode Operation: G.R.A.D.U.A.T.E.S., they were turned into a kangaroo with a Joey in it's pouch.

They were also seen in Operation: C.L.O.S.E.T. running across, during the incident of Billy Hocslawger. Despite the brief sibling rivalry between the two, they seem to have a mainly cordial relationship, as such when starting the retreat in Operation: G.R.A.D.U.A.T.E.S., one of them said "Want to run away screaming?" to the other, to which he calmly replied "After you". They dropped their weapons and screamed with the rest of the operatives before they proved too slow and became victims of the ray.

One of them appeared in Operation: G.I.R.L.F.R.I.E.N.D. at the moonbase cafeteria. 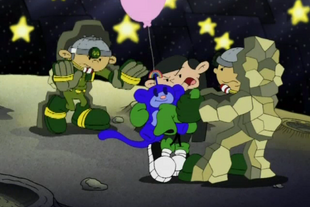 In Operation: M.O.O.N.
Add a photo to this gallery
Retrieved from "https://knd.fandom.com/wiki/Numbuh_44?oldid=84828"
Community content is available under CC-BY-SA unless otherwise noted.