Numbuh 23 a.k.a. Virginia Sims is an Incendiary Confectionery Munitions Agent in Sector K. She was part of Numbuh 86's slumber party and fought the Teen Ninjas for the Code Module, but ultimately lost it.

Virginia's usual outfit is a black blouse, grey pants, yellow earrings, and black strapped Mary Janes. She has brown hair put up in pigtails, with the hair holders being red. She also wears two yellow bracelets on each of her wrists.

She was one of the girls at Numbuh 86's slumber party in Operation: S.L.U.M.B.E.R. Like the others, she assists in stopping an attempt to steal the Code Module by the Teen Ninjas after Numbuh 12 betrays the KND. However, she does not participate in the fight much. During the party, she asks Numbuh 3 to tell them whether or not she "like-likes" Numbuh 4.

Numbuh 23 was also seen as a background character in Operation: C.H.O.C.O.L.A.T.E., where she helped eat Sector V out of their chocolate casings. In Operation: Z.E.R.O., she was seen on top of one of the street lights, being attacked by Senior Citi-zombies at the Moonbase Headquarters.

In Operation: I.T., she was briefly "it" after being tagged by Numbuh 13 and before tagging Numbuh 44. Numbuh 23 also made an appearance in Operation: M.O.O.N.

She is also seen in Operation: T.R.E.A.T.Y. listening to Numbuh 362's speech about signing a treaty with the teenagers. She was also at the science fair in Operation: S.C.I.E.N.C.E.. 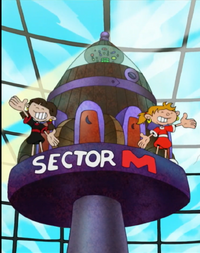 Retrieved from "https://knd.fandom.com/wiki/Numbuh_23?oldid=88164"
Community content is available under CC-BY-SA unless otherwise noted.