"Humiliated by the establishment, I had no choice but to work in my family's candy shop and watch kid after kid come in to buy cavity-inducing treats. It was too much. Too much. Too much! Too much! So I donned the corrective headgear and became the enamel avenger, Knightbrace!"

Mr. Jelly, also known as Knightbrace, is an oral health-themed villain who attacks children at night and forcibly performs painful and unnecessary dental and orthodontic procedures on them. He first appeared in Operation: T.E.E.T.H. and is one of the most frequently recurring villains of the series.

Knightbrace wears a dark blue/purple costume with a tooth on the front and a large halo-shaped retainer; this causes him to speak with a lisp. He also wields an extremely large toothbrush, clubbing the KND with it and even using it to pole vault. He also carries around a mouth mirror, and his purple gloves can shoot out a stream of toothpaste.

Mr. Jelly had dreamed of being a dentist all his life, even pulling out one of his dog's teeth as a child. But he used extreme methods and was kicked out of dental school for trying to put braces on babies. He was then forced to work in his family's candy store, thus damaging kid's teeth rather than cleaning them. This ultimately drove him over the edge. He thus became Knightbrace and sought out to repair the damage he'd done.

Sector V first became aware of Knightbrace when he was encountered by Numbuh 3 while she was walking home one night after a trip to Mr. Jelly's candy store; the entire team went back to the candy store with her because her teeth got whitened to an extreme level. On the way back, Knightbrace launched a sneak attack on Numbuh 4 and nobody noticed until they reached the Sector V Treehouse, whereupon they found Numbuh 4 tied up with giant braces that stuck out very far and within minutes both Numbuh 2 and Numbuh 5 were also attacked and tied together with floss. The KND initially assumed him to be Dr. Sigmund Teef, a dentist who had offered them free checkups (and been rudely refused) earlier that day. When the villain is unmasked by Numbuh 1, he and his team are shocked to learn his true identity to be Mr. Jelly. Dr. Teef, who had been awakened by the noisy fighting, then walks into the room, at which point Knightbrace's past is revealed. Dr. Teef saves the KND from Knightbrace by giving him taffy, his "delicious weakness". Apparently, even Knightbrace has an occasional sweet tooth, despite his hatred of cavity-inducing foods.

In Operation: V.I.D.E.O.G.A.M.E., Knightbrace, along with his army of Dentadrones, attempt to create a glowing toothpaste known as "Bug-Brite", which is made from firefly poop. He manufactures his new toothpaste in a secret cavern known as the Cavity Cave. He is the boss of Operation: C.A.V.I.T.Y.C.A.V.E..

In Operation: A.W.A.R.D.S., Knightbrace is the host of the Villain's Choice Awards. As his clothes are stolen by Numbuh 4 during the episode, he is forced to appear onstage in his underwear. He was to read the winner of Best Villain award, but was caught up in the fighting before it could be revealed.

In Operation: F.L.U.S.H., Toiletnator believes Knightbrace to be Numbuh 4, who he considers to be his arch-nemesis, when he attacks his fellow villains at the Sector V Treehouse and violently disposes of him. When he does this to Knightbrace, a view of the treehouse shaking violently is shown on screen with a rumbling sound affect.

Knightbrace is believed to have been tie-ified along with Potty Mouth while at the tieland common shopping mall in Operation: I.N.T.E.R.V.I.E.W.S..

Mr. Jelly, as a young adult, being expelled from dental school for trying to put braces on babies.

Another early concept of Knightbrace
Add a photo to this gallery 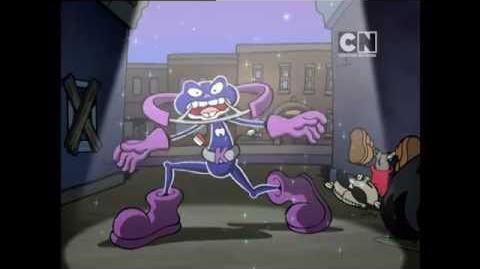 Codename Kids Next Door - Operation T.E.E.T.H. (Preview)
Add a photo to this gallery
Retrieved from "https://knd.fandom.com/wiki/Knightbrace?oldid=91882"
Community content is available under CC-BY-SA unless otherwise noted.