The Kids Next Door Seriously Cool Museum of Artifacts and Stuff is a Museum of Kids Next Door artifacts, 2x4 Technology and wax statues of villains, with a gift shop and a snack bar. Numbuh 101 is the head curator there.

Outside view of KND Museum 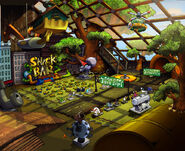 Retrieved from "https://knd.fandom.com/wiki/Kids_Next_Door_Seriously_Cool_Museum_of_Artifacts_and_Stuff?oldid=89178"
Community content is available under CC-BY-SA unless otherwise noted.