"The sport is called MINIATURE GOLF!!"

Rupert Puttkin is a world champion Miniature Golf player who takes the sport very seriously, insisting on it being called "miniature golf" rather than "mini golf" and taking offense to it being called "just a game". He is very nerdy, rude and obnoxious, and lives with his mother.

In Operation: M.I.N.I.G.O.L.F., Sector V comes across Rupert and Numbuh 2 challenges him to a game of miniauture golf after he makes some extremely rude comments to them. Despite never even having played the sport before in his life, Numbuh 2 beats Rupert in mini golf, mostly due to pure luck, stripping Rupert of his champion title and publicly humiliating him. To add salt to the wound, he overhears Numbuh 2 telling a TV news crew that mini-golf is "kinda dumb".

This causes Rupert to go insane, donning a costume and dubbing himself "The Great Puttinski".

He uses a miniaturization ray to shrink several famous monuments from around the world and uses them to build a miniature golf course in his basement. The following night, The Great Puttinski comes to the Sector V Treehouse, kidnaps Numbuh 2 and shrinks him to the size of a golf ball, bringing him to his basement for a "rematch". The final hole of the course is the "Flaming Hole of Doom", which travels into the center of the Earth. Should Rupert get a hole-in-one, the miniaturization ray will fire down the hole and shrink the entire world to the size of a golf-ball. Numbuh 2 is used as the "ball", and is shot into the windmill hole, beginning the shrinking process. However, as the windmill continues to spin, he is launched off of it and ricochets off of a light-bulb onto a switch on the machine, changing its mode from "smallify" to "bigify". The ray hits Puttkin, causing him to grow into a giant and step on his golf course. Eventually, Numbuh 2, who is still flying around the room, flies into his face and knocks him out.

He was also seen at several villain meetings, and in Operation: I.N.T.E.R.V.I.E.W.S., he was in his basement playing golf until his golf club mysteriously disappeared. 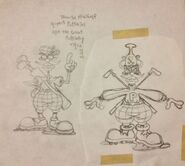 Concept art for the Great Puttinski by Mr. Warburton

Retrieved from "https://knd.fandom.com/wiki/Great_Puttinski?oldid=90073"
Community content is available under CC-BY-SA unless otherwise noted.