The Florida Sector only appeared in Operation: Z.E.R.O..

Their treehouse was seen in the movie , Operation: Z.E.R.O. as the first treehouse that Grandfather transformed into a tapioca factory. This sector is said to be in Florida (most likely Orlando in particular) because of the fact that it's located in an orange orchard, and has many theme park attractions attatched to it such as a roller coaster. The base housed multiple operatives, including, but not limited to, operatives wearing sports clothing, an alligator/crocodile suit, sunglasses identical to Numbuh 1's, and at least one operative wearing a helmet similar to Lenny.

This treehouse has the unfortunate honor of being the first treehouse to be turned into a tapioca factory by Grandfather.

The operatives zombified at this treehouse were seen battling non-zombie KND operatives on the moon base, the crocodile suit operative is seen walking around aimlessly before Zombie Numbuh 60 makes his entrance. The operative in the sports clothing is seen as one of many swarming an unnamed female operative on the stairs.

At the end of the movie, the treehouse was the first one to be seen returning to it's normal state, and it is shown the operatives there were also returned to their normal states, who are subsequently seen chasing around some fleeing villians, in retaliation for their zombification.

Their treehouse would later be used by another villain, Heinrich Von Marzipan. In Operation: C.A.R.A.M.E.L., he linked up a number of KND treehouses to create the Caramelization Circle, turning all the operatives' most valuable qualities into Golden Caramels. After Heinrich was defeated, they received instructions by Sector V on how to reverse the Caramelization.

The treehouse seemed to have multiple cars equipped with orange juice firing cannons, and had a blast door leading to the interior of the base as well. Said defenses were almost entirely useless in stopping the Zombies, even if some of the zombies were taken down. 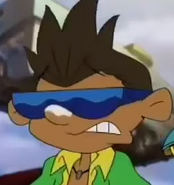 The first operative, possibly the leader 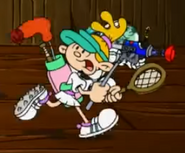 The fourth operative, presumably a player of golf

Character models
Add a photo to this gallery

Retrieved from "https://knd.fandom.com/wiki/Florida_Sector?oldid=84859"
Community content is available under CC-BY-SA unless otherwise noted.