The Dodgeball Wizard is an eccentric adult wizard who wants to prove adults can play dodgeball as well as any kid and prove that an adult is the best dodgeball player ever. To this end, he traveled around the world, defeating any child of great dodgeball skill. When he was about to defeat the previous greatest known child player the boy told of another, "the one called Beetles" who was the greatest player ever. Angry that there is still another great kid dodgeball player out there, the Dodgeball Wizard goes to defeat the last greatest kid player in order to be the best.

He captured Numbuh 4's mother, father, and baby brother Joey in order to 'persuade' Wally to battle him thinking him to be the greatest player, but he knocked Numbuh Four out in seconds. However, Joey, the real greatest player, snuck out of his bonds and defeated the Wizard before the villain could even react no matter how many attacks he threw. After a while, Joey broke the wizard's nose, causing him to flee and crying to his mom.

He said that he has spent sixty-four years trying to prove that adults are better at dodgeball than kids. Given the fact that he would have to be an adult in the first place to even start this quest, he should have been at least 18 when he first started. If so, he should be at least 82 at the present timing. Regardless, his mother is still alive, which would make her well over 100.

Being a wizard, the Dodgeball Wizard uses a lot of magic, mostly conjuring up dodgeballs of any size and telekinetically throwing them at his opponents. He can also fly.

He was later seen next to Robin Food in Operation: Z.E.R.O. during the Candy Pirates attack on Kids Next Door Moonbase. 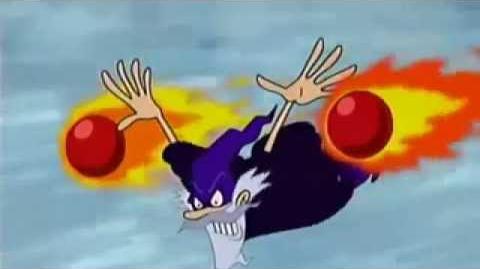 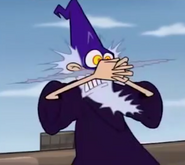 "You broke my nose"
Add a photo to this gallery
Retrieved from "https://knd.fandom.com/wiki/Dodgeball_Wizard?oldid=90653"
Community content is available under CC-BY-SA unless otherwise noted.