Delightful Mansion From Down The Lane

The Grim Adventures of the KND

The Delightful Reaper was a monster seen in The Grim Adventures of the KND. It was created from a Delightfulization Chamber by Billy and the delightful children when Billy was walking inside of it while wearing his dad's lucky pants and carrying Grim's scythe in their back pocket. The children went inside the chamber and try to get Billy out, but he touched something inside which causes the chamber to rumble and smoke. Billy and the delightful children started to scream when lightning flashes inside the machine, changing them from their skins to their skeletons as something supernatural to create the Delightful Reaper. A giant Grim Reaper-like figure that looks similar to grim but wearing the lucky pants and featuring skeleton skull versions of the faces of everyone it had assimilated. Which at the time of its creation consisted only of Billy and the Delightful Children From Down The Lane, but soon started to grow as the Delightful Reaper began assimilating other children.

Its other ability was to create massive storms and dark power at will but this ability was only briefly seen. When Mandy took control of it before Billy's dad pulled down the pants to reveal the reaper's weak point. Its power was so great that a single clash with an equally powerful force would force back it's opponents but leaves the reaper unfazed, finally, it was quite fast despite its size being able to use the lucky pants by turning around to deflect an extremely fast attack from Mandy's M.A.N.D.R.O.B.O.T. Out of all villains in the KND universe, the Delightful Reaper is perhaps the most powerful villain in the series (the second powerful being Grandfather) because it has so many powerful abilities such as assimilating anyone it strikes and that it is almost impossible to harm or defeat unless the pants it is wearing come off.

Soon, it had assimilated nearly everyone on the planet, whose skeletal faces at this point formed into a shape resembling Grim's face. Numbuh 1 and Grim, who had fused together to form a giant skeletal samurai monster using the "Bone of Barnacles", then arrive to fight the Delightful Reaper, but are unable to defeat it due to the lucky pant's immunity to lasers, supernatural energies, and mustard.

As it is about to assimilate them, Mandy's M.A.N.D.R.O.B.O.T. arrives on the scene and puts on a decent fight, but the reaper is not even injured, the only "wound" being a quick-fading

mustard stain on its robe, but instead of pulling down the Reaper's pants, which is the only way to defeat it, Mandy allows herself to be assimilated by the Delightful Reaper, becoming its dominant personality and granting her unimaginable power.

Billy's dad then appears, demanding the return of his lucky pants, and leaps to the height of the giant monster's waistline, pulling off its pants and rendering it vulnerable. The Delightful Reaper is then destroyed by Grim and Numbuh 1 hitting it's a weak point and releasing the children it assimilated. As the Delightful Reaper explodes, several characters from other Cartoon Network shows are seen flying out of it.

The Delightful Reaper is made up of:

Early concept art for the Delightful Reaper by Mr. Warburton.

Concept art for the Delightful Reaper 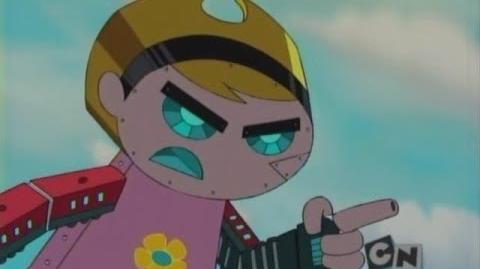 Universal Fighting Moments M.A.N.D.R.O.B.O.T Vs The Delightful Reaper Vs Numbuh 1 and Grim
Add a photo to this gallery
Retrieved from "https://knd.fandom.com/wiki/Delightful_Reaper?oldid=90571"
Community content is available under CC-BY-SA unless otherwise noted.